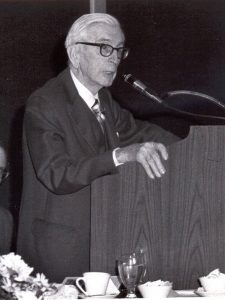 The Macy Food Science & Technology Award, “Macy Award,” was established in 1981, and is given annually to recognize an outstanding example of food technology transfer or cooperation between scientists or technologists in any of the following settings: academic, government, and private industry. The purpose of the award is to advance the profession and practice of food technology and to honor Dr. Harold Macy, Dean Emeritus of the University of Minnesota and Founding Member of IFT. The award comprises a plaque, $2500 honorarium, travel expenses, and dinner speaker at the Minnesota IFT Section April Macy and Student Awards meeting held in Minneapolis.

The Macy award is supported through the Macy Award capital fund. The Macy Award committee, composed of MN IFT Section members, is responsible for reviewing the nominations and selecting the Macy awardee. Questions about the award and nominations should be addressed to Dr. John W. Larkin, Macy Award Committee Chair, john.larkin.iit@gmail.com.